by digitalteam in Uncategorized
Link to Stuff Article

An Auckland firm hopes to be taking orders next year for a carbon-fibre, battery-powered commuter ferry it is developing for a global market.

EV Maritime has been spun-off from established boat-builder McMullen and Wing, with the aim of becoming an early leader globally in electric fast ferries.

Auckland’s Fullers’ Ferries has invested $300,000 in the firm’s research and development over the past year, making an advance payment on a first order.

EV Maritime said the timing was perfect, with Auckland’s need to overhaul its ferry fleet, combined with the evolution of battery technology and the increasing focus on tackling climate change.

“We do have a vision of carving out a meaningful niche globally in zero-emission fast ferries,”

said Michael Eaglen, who shifted from being the chief executive at McMullen and Wing, to co-found and head the ferry project as a joint venture. 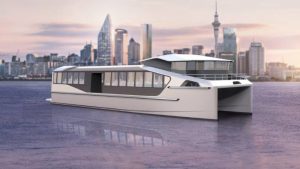 Design is well-advanced on a carbon fibre ferry which EV Maritime hopes can be trialled in Auckland ahead of the APEC Leaders’ Week in November 2021, where it could showcase this country’s marine industry.

Eaglen said while there were a few other firms internationally working on a handful of electric fast-ferries, New Zealand had a chance to be a world leader.

A similar project is underway in the capital, where the Wellington Electric Boat Building Company is working with East by West ferries on a cross-harbour vessel to enter service in mid-2020. 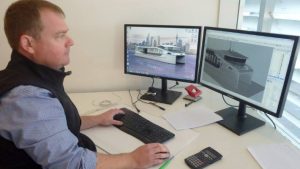 EV Maritime said its concept was more than just a fast ferry with battery power, with a strong focus on technology to make it easier and more efficient to run.

In addition to the environmental benefits of replacing loud, polluting diesel ferries with clean and quiet electrics, Eaglen said the battery-powered boats stack up on purely business terms.

“It’s something that was not possible before because battery technology was not there yet – now it is,” he told Stuff.

Fullers told Stuff it saw a bright future for battery-electric ferries on the Waitematā Harbour.

“I would be keen to see up to 10-12 fully electric ferries doing all the inner harbour work,” said Mike Horne, the chief executive.

EV Maritime has worked closely with Auckland Transport, which has spent several years trying to develop a new strategy for ferries in the city, with possibly a purpose-designed and built fleet.

McMullen and Wing has a long history boat-building on the Tamaki estuary, its sporting creations including Team New Zealand’s 1995 America’s Cup-winning boat, and involvement in the country’s first AC challenge, the 1986-7 “plastic fantastic” KZ7.

Eaglen said a firm which can get an early fleet of electric fast ferries up and proven, could win a dominant role in the global market.

He said the export market might not be about selling Auckland-built ferries, but partnering with overseas agencies and communities selling its designs, expertise and intellectual property.

He hoped the firm would have the initial design completed and costed, ready to be taking orders from early next year.